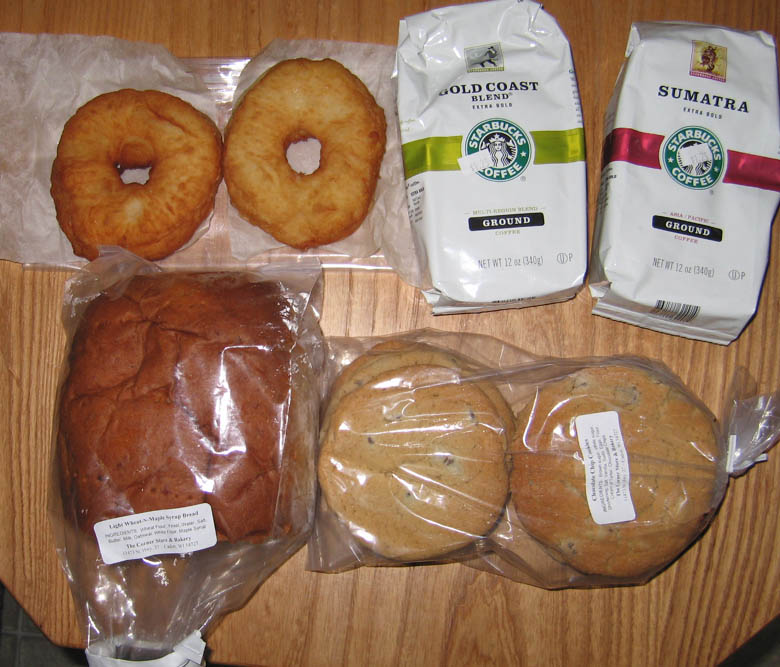 Travel to the Upper Midwest, and once you get off the interstate, you’ll find long, winding county roads that can take you through miles of gorgeous farmland and forests without ever seeing more than a few other vehicles. Traffic? Stoplights? Nope. Just plenty of cows, corn and water.

Last Friday, we’re cruising along on Wisconsin’s backroads, going from our campsite at Harstad County Park, (about 20 miles south of Eau Claire) , up to Chippewa Falls to go on a Leinenkuegel Beer brewery tour and check out the towns. We’re driving along, and spot a “Farm Fresh Eggs: $1” hand painted sign outside of a homestead. I had to stop; what a deal! Then, as we approach Cadott, (whose claim to fame is that the town’s exactly halfway between the North Pole and the Equator), Jim spots another sign: “Bake Sale Ahead.” Below that, it says “Scratch and Dent Corner Store.” Our two favorite things; sweets, and bargains!

We pull over. Out back, goats and chickens roamed the grounds. We swung open the squeaky screen door, and realized that an Amish family runs the store. Neither one of us were expecting it; we’d never met an Amish person, and the closest we’d ever been to anything Amish is when Jim used to bake Amish Friendship Bread every week. Both of us wrongly assumed that most Amish lived in Pennsylvania. Turns out that in this area of Wisconsin, there is a large, Amish community.

A woman in traditional apparel sat quietly behind the counter. With my tattoos, tank top and scruffy shorts, I felt like I was being disrespectful, like being in a church dressed like that. Jim and I said hello, and she acknowledged us without exactly saying “hi” back, but through cordial enough eye contact. Right away, we noticed that there was no refrigeration. Then we saw that they had the most incredible display of homemade sweets and baked goods that we’d ever seen. The selections were simple; no sprinkles or pink frosting; just pure, elegant baked goods, like big moon pies made with in-season berries, $1 each. Fresh, huge donuts, 3 for $1.

Even though the desserts didn’t have the flash of a traditional bakery, you could just tell that they were amazing. The rest of the store had more homemade goods like jam, and also a ton of closeouts and bargain food items. Many were things I buy regularly; Near East Couscous, Zatarans Jambalaya, Yellow and Spanish Rice — many for .50 cents or less! We assumed they bought up what big grocery stores might just throw out, because a lot of these items were close to their “sell by” dates, and resold it.

We loaded up, then took our loot up to the counter. We were the only ones in the store, and we hadn’t even realized that a new woman had been sitting behind the register. The two of them had changed places so quietly, we didn’t even hear it happen. She rang up our items on a hand-crank cash register that had to be at least 50 years old. Two bags; $13. Holy….!

When we finally got into the truck and ate our donuts, we were blown away. These donuts, made by hand with the freshest ingredients available, were the most amazing, doughy, sweet, delicious plain donuts we’ve ever had! The Amish way of baking proves that even the priciest ingredients from Whole Foods can’t do better than something made from the purest, most noble intentions.

Now that I’ve been a little more educated about this group of people, I’m even more impressed with the way that they use everything up – from food to wood – they use it to it’s fullest, never wasting any bit of it, always making things by hand with little more than time, skill and love. They are a true Simple Living society.

2 thoughts on “The Amish Have Got it Right”