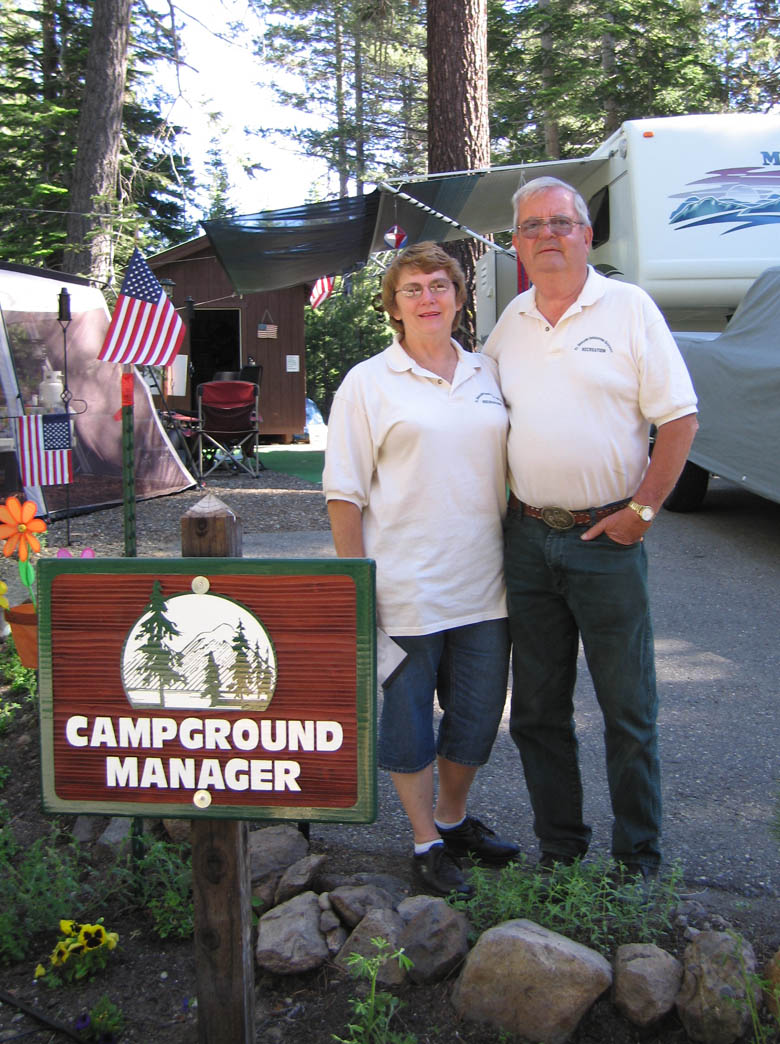 I’ve always wondered about what it was like being a campground host. Then, over the weekend, a really nice host named Jim Wagner helped Jim and I back our RV into a tight spot at Silver Lake, off Hwy. 88 near South Tahoe. He seemed to be really seasoned at being a host, and with RVing in general, so I asked him if he would tell me a little bit about how he got to be a host and what it was like.

About 18 years ago, Jim retired from the CA Department of Forestry. He ended his CDF career as Deputy Chief in charge of Conservation Program, after working there for 36 years. While living and raising kids in the Sierra Foothills, he and his wife Jo have been RVing with their family since 1964, making the outdoors a central part of their lives.

Two years ago, Jim and Jo were happily going along enjoying their retirement together, when a close friend told them about the job opening at Silver Lake Campground West, operated by the Eldorado Irrigation District. At first, they wanted nothing to do with the job.

Reluctant at First
“We didn’t want to be tied down, we really didn’t want it,” says Jo. Jim says their friend asked him two times to go apply, then when he saw his friend a third time, the friend told him what day and time to be at the interview. Reluctantly the couple went to the interview, and today they are so glad they ended up taking the job.

Their misconceptions about being a campground host turned out to be false. “We really aren’t tied to it,” says Jo. “If things come up, for example we had a funeral to go to last summer, we just tell our boss.” “They’ll find us a replacement so we can go” added Jim.

In exchange for all of their work, the EID furnishes a premium campsite spot, propane, sewer dumping, company vehicles and everything else they need to be comfortable in their 28 ft. 5th wheel during the summer. Their boss is wonderful, they couple says, and they couldn’t ask for a better one.

“This is a pretty awesome place, we’ve really fallen in love with it,” Jo says.

Life as a Campground Host
A typical day starts at 8:30 am., with “potty patrol,” as Jim calls it. They disinfect the bathrooms, add deodorizer and new paper, and once a week they pressure wash each bathroom from top to bottom to keep them sparkling clean. At the end of the day, you’ll find them making the rounds again.

Last Thursday on top of his regular duties, Jim could be seen tree trimming around the vault toilets, while stopping to give a thankful new Rver some on how to back up his 5th wheel trailer into a tight spot.

Jim says that the best thing he likes about being a host is “meeting great people.” Very few people give them any hassles. “Only about one percent, but you always have to have that 1% in any crowd,” he said. And even that one percent has always honored his request to follow the rules or leave.

“99% of people are good and honest,” says Jo, they’ve hardly had any problems at all with campers coming here. Jim adds, “They’re here to get away from the city, to have a campfire and enjoy themselves,” and not make trouble.

Caring for Their Campers, and it Shows
The couple looks at everything at the park as if it were their own, and their ultimate goal is making every area as comfortable for campers as possible. They’ve made numerous improvements, from painting the front entrance sign boards, to re-landscaping, to painting all campground bathrooms and the other day use stops that EID owns along the highway (eighteen in all!).

All one has to do to see the difference they’ve made at this campground, is to stop by the U.S. Forest Service owned campground located just across the road. Sites there are crowded and crampted together, landscaping is non-existent, and trees are rarely trimmed back, making it hard for any RV to make it through. The EID campground is like a resort in comparison.

When they first started as hosts, one of the first things that Jo insisted on doing was replacing the old toilet seats in the vault toilets. “The old ones were just horrid! And I didn’t want my campers to have to use them.”

It’s easy for them to make so many improvements around the park. “Our boss is so wonderful,” says Jo. Anthing we need, she makes sure they get it, from a socket set used to work on campground signs, to landscaping materials, to dozers used to widen the driving paths just a little to accommodate larger RVs.

What does he dislike? “I can’t say that we have any dislikes” says Jo.

Jim adds, being a host “has been super good for our health. We get a lot of exercise. I lost 30 pounds last summer.”

Too Busy for The Tube in Retirement Years
Jo and Jim are quickly approaching their 50th wedding anniversary, and looking at the two of them, you’d never guess it. Fit and full of exuberance, they’re aren’t slowing down one bit. While Jim says that they’ve seen “so many people retire to the television set,” they don’t have time for the tube. Their daily activities at Silver Lake Campground keep them going full speed ahead, and when they get home in the wintertime to their permanent residence in the Sierra Foothills, those catch-up jobs will keep them busy the rest of the year too.

1 thought on “Life as a Campground Host”