The great debate over whether or not to idle your diesel engine after a long haul rages on in numerous RV forums and Facebook groups. I’ve heard long time long haul truckers tell you don’t bother, diesel mechanics say it’s a must, and many RVers with opinions of their own. And then there are those who will insist it is just rude to leave your truck running when you arrive at a campground.

I’m here to settle that debate right now for anyone towing a fifth wheel or trailer with a diesel truck, and explain why… 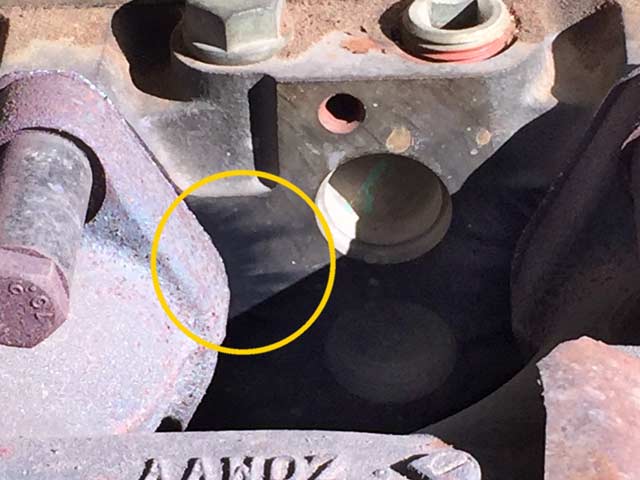 Do you let your diesel engine idle when you stop?

Why should you idle your diesel truck?

To maintain top performance and prevent costly repairs to your diesel engine, you should always let your truck idle for a few minutes after any long haul. I know, I’m speaking from personal experience. 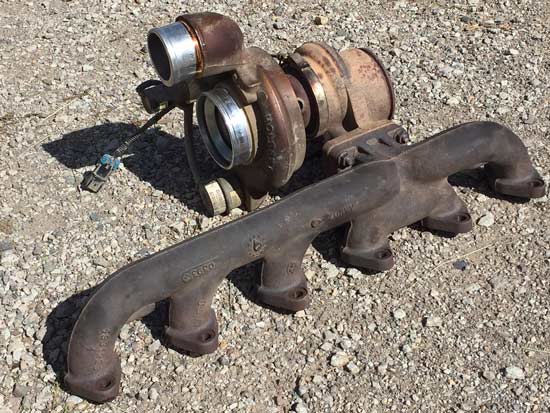 We first had our Dodge Ram Cummins diesel exhaust manifold worked on a few years ago after noticing a high pitched whine coming from under the hood when climbing steep hills. The noise slowly became more noticeable and more frequent over the next few weeks, when we started to notice a drop in power and acceleration. The mechanic pointed out the exhaust leak, indicated by black streaks escaping a port on the manifold.

That same mechanic replaced the exhaust manifold gasket. That was the first mistake. He also later described how difficult it was to get the manifold back on. That was the second sign we should have found a better mechanic. 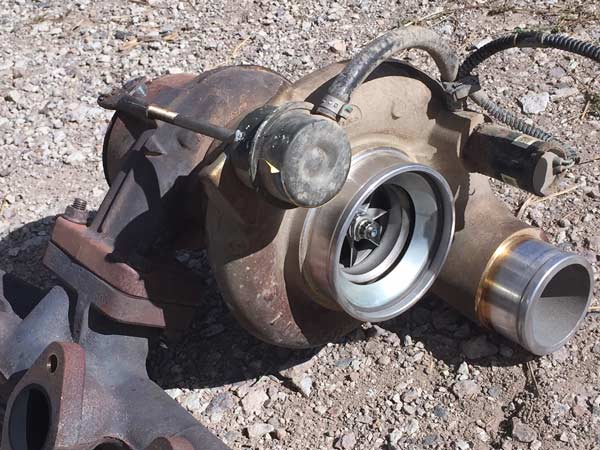 What happened? After 6+ years of traveling full-time and neglecting to regularly let the engine cool down after long trips, the exhaust manifold had warped. At the time, we had no idea about such things. We continued full-time RVing as usual.

A couple years later, another mechanic pointed out an exhaust leak and blamed it on the first mechanic’s shoddy work. Another manifold repair later we were on our way with another mechanic bitching about the hard time he had getting the manifold back on. Well, duh. The thing had warped! I can say that now, knowing what I now know. 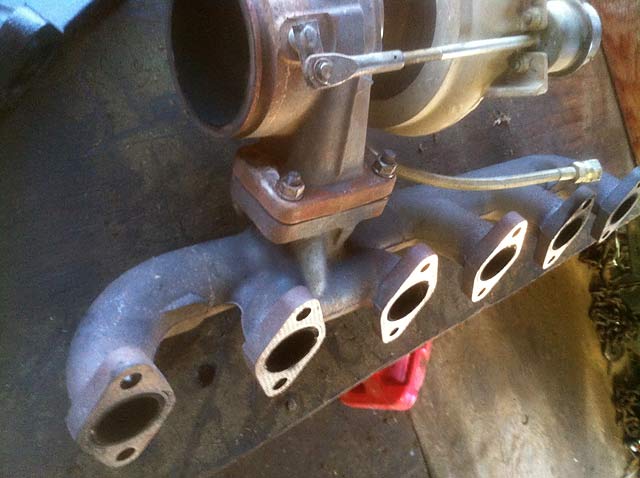 How to properly repair exhaust leaks?

Both of the previously mentioned mechanics were hacks. They either took the cheap way out, or they didn’t know what they were doing. At least one of them literally hacked up the job by drilling out the manifold flanges to get the bolts to fit.

Before hitting the road last year, I noticed the tell-tale sign of yet another exhaust leak. I was determined to get the job done right, so I hoped we would make it back to our Vickers Ranch workamping job before noticing any serious symptoms. I’m glad we did, because that is where I consulted with my friend and certified diesel guru Dan the Man, and had him to the job right, for good! 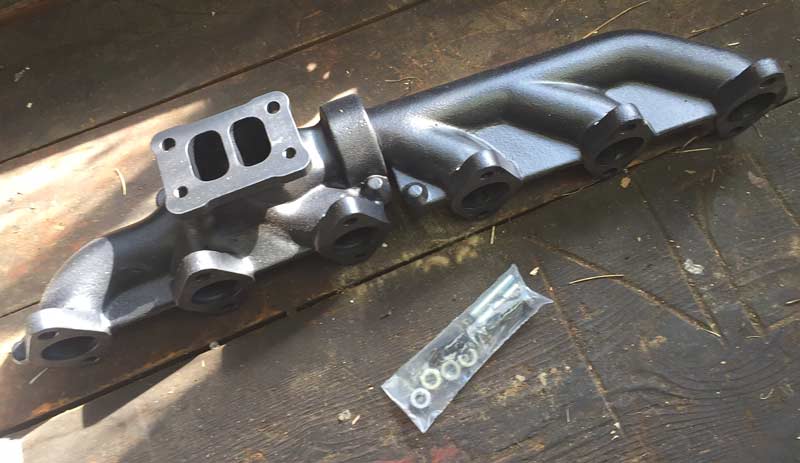 How to prevent exhaust manifold leaks?

Dan explained how you must let the engine idle a while to cool down after any long haul to prevent the manifold from cooling too fast. The exhaust manifold gets hot, really hot on long trips, especially those over steep mountain passes. Stopping at the top of those passes and shutting the engine right off to enjoy the view is gonna get you in trouble. In short, the quick cooling will end up warping the manifold. 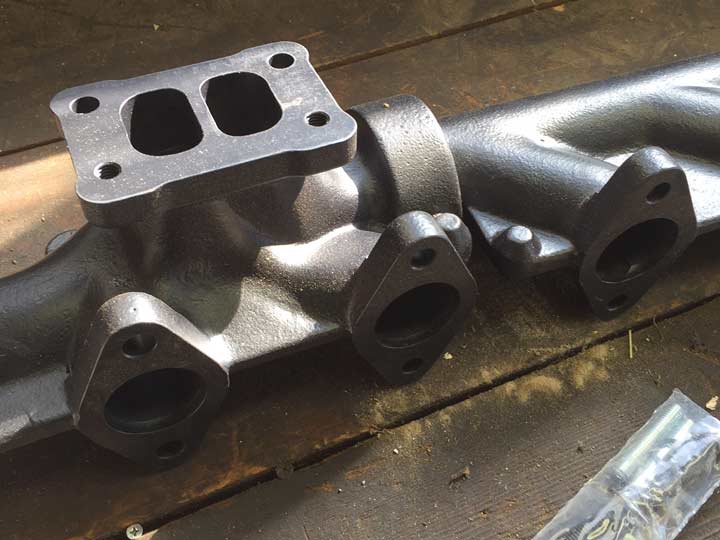 Dan also explained the benefits of installing a two-piece manifold like the ATS Diesel Pulse Flow Exhaust Manifold. The Pulse Flow manifold is designed for performance and longevity, with some serious engineering behind it! The most noticeable feature of the ATS and other 2-piece manifolds is an expansion joint in the middle that allows the manifold to heat up and cool down more efficiently, without warping. You will notice it is also reinforced between the ports, making it stronger and less likely to warp. 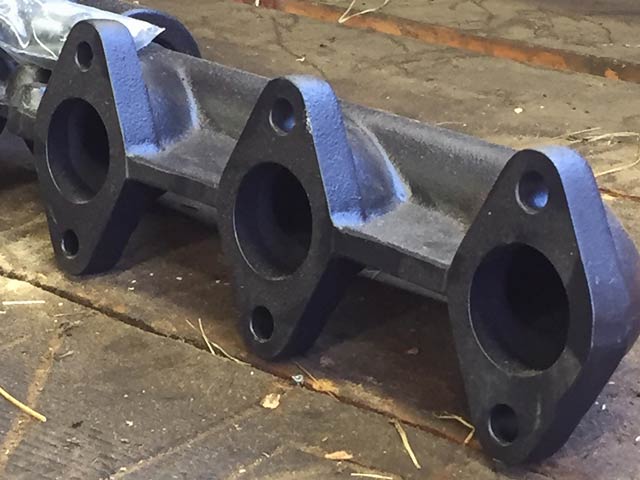 Yeah, the two part Pulse Flow Manifold is a bit more spendy, but it’s well worth the investment. It fit our 5.9L Cummins Diesel perfectly and has a stock Turbo connection—but we’ll get to that in a minute. After all, that ATS Diesel stands for Aurora Turbo Systems. 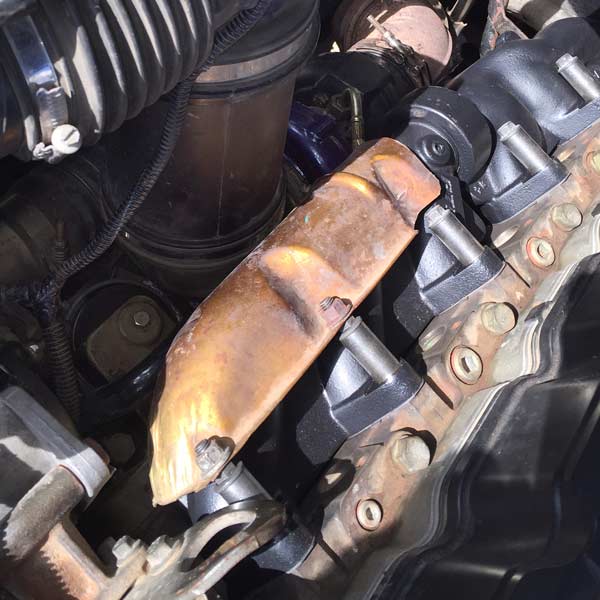 How long to idle diesel engines?

Having a top-of-the-line two-piece exhaust manifold does not exempt you from letting your engine cool down before shutting off the engine. In fact, you should pay even more attention to protect that investment in your tow vehicle. Dan explained that three to five minutes is usually sufficient for cooling down a diesel engine. He also said it isn’t necessary when just running about town without the trailer. But after long hauls you may want to idle the engine for up to seven minutes to allow the manifold to cool down.

That’s why the next toy on my wishlist is an Exhaust Temperature Gauge to provide peace of mind, knowing when it is OK to shut off the truck. 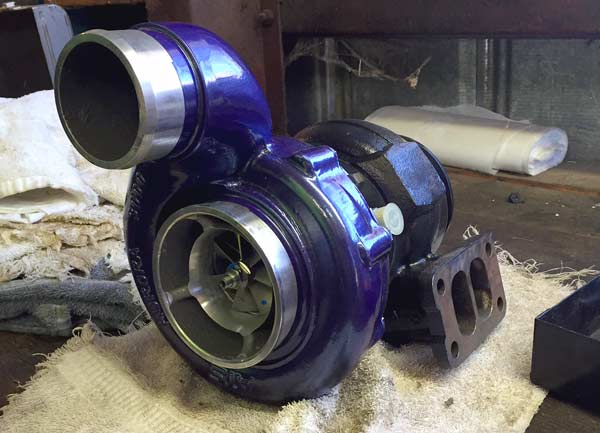 A good quality mechanic like Dan is going to do a thorough job and pay attention to detail when doing a job like this. If you end up replacing your exhaust manifold, and if your mechanic doesn’t mention the turbo, make sure you do. Or find another mechanic.

The turbo has to come off when replacing the exhaust manifold, so it should be inspected at the same time. On the Cummins Diesel engine the turbocharger has a tendency to go out at about 150,000 miles. Well, our odometer is about to hit 160,000. After removing our manifold, Dan identified the tiniest little crack in the turbo housing. He also had me spin the fins and feel the slightest resistance in one spot. It only made sense to replace the turbo at the same time. The alternative? Have the turbo explode within another few thousand miles. When that happens, all those tiny metal pieces get sucked into the engine, resulting in a true world of hurt. 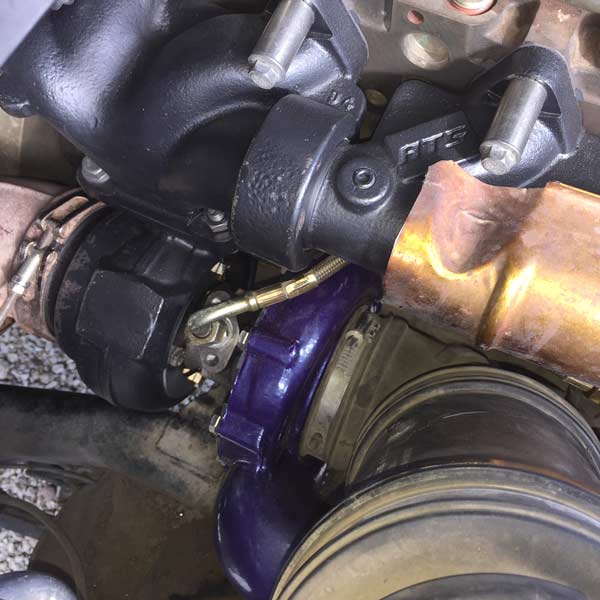 We bit the bullet, and took Dan’s advice to make another smart investment in our tow vehicle. We purchased a high quality aftermarket ATS Diesel Turbocharger System. Dan provided all sorts of technical reasoning about advanced engineering and airflow. I just kept seeing exploded turbo parts getting sucked into the engine in my mind.

Not only does the ATS Turbo look Bad Ass, it sounds cool and provides some serious pickup. On a test drive with Dan, he described how I should notice an improvement in performance. I proved him right as I gunned it up Slumgullion Pass. Only after driving our “new truck” for the past few weeks, did I realize how much power the engine had lost since first hitting the road 9+ years ago. 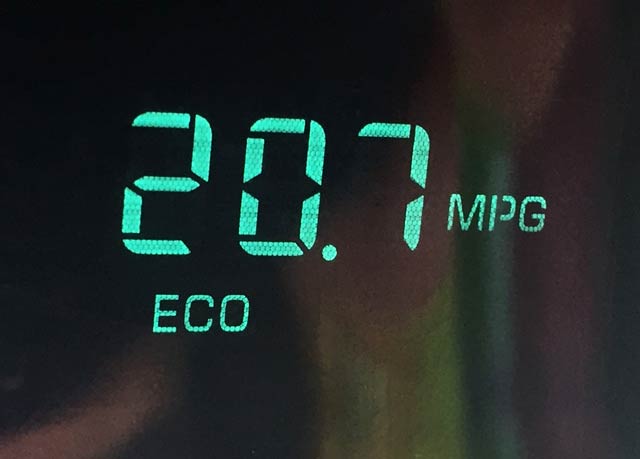 Pep, yeah we got that now. As we left the ranch, Dan said, “Don’t get a ticket!” Thankfully, we haven’t gotten that, though it would be pretty easy now. Another thing we do have now, is much better mileage. Since installing the new ATS Diesel Turbo and Pulse Flow Manifold, we’ve seen up to 17MPG when towing and as much as 22MPG without the trailer. 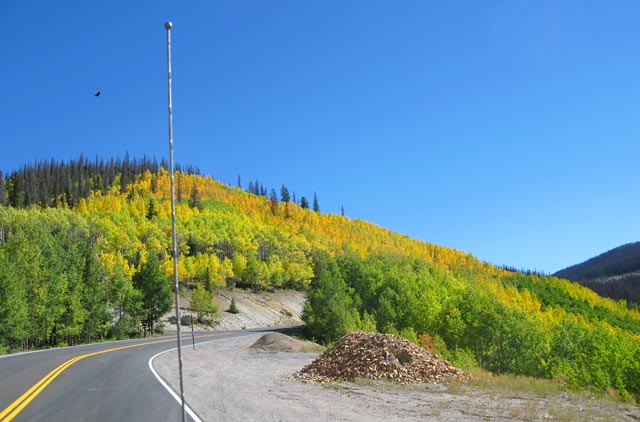 Cruising Up Slumgullion Pass With Ease

Do yourself a favor and let that diesel engine cool down a while the next time you pull into a campground. If you get any glaring looks, gun the engine and whistle at them with your new turbo!

14 Responses to “To Idle Your Diesel Or Not, That Is The Question!”

Leave a Reply to Jimmy Click here to cancel reply.