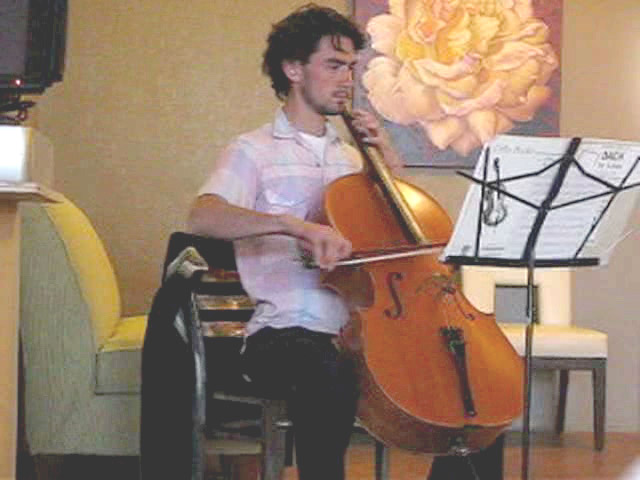 The solo performance by classical cellist Brian Patrick Bromberg was the saving grace of our dinner in Truth or Consequences.

And it made us wonder what on earth brought him to T or C after having been classically trained in Chicago and New Zealand.

But there I go digressing again. About that restaurant review …

This was the “fanciest” restaurant in Truth or Consequences, NM. It is definitely upscale for this town. Most everyone had a collar on their shirt, they didn’t smell all that bad, and appeared to have most their teeth. Good thing, because the food is absolutely worth chomping down on. If they bring you what you ordered, that is.

In all fairness to our delightful server, it was a “bad energy day” as one of the hippies, er … guests at Riverbend Hot Springs told us that morning. It was a rough day in the office from the beginning, and things just tended to not go right throughout the day. This one guest felt it, and said we could blame it on the bad energy circulating about. So we did.

But having served in both dives and finer dining establishments, I believe there is no excuse for bad service.

First the apparent confusion about whose table we were sat at. After no attention for almost ten minutes, I paid attention to a young, (literally) punk waiter explaining to the elderly hostess that we were not his table. René recognized this as the same scary guy from the park who yelled at his pit bull after he had stumbled over the dog’s foot. We instantly felt some of that energy. 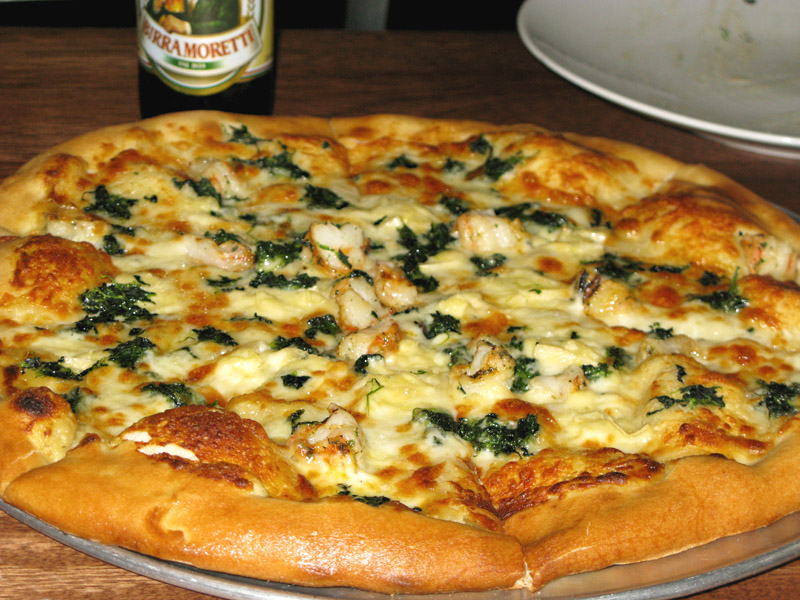 We had plenty of time to figure out our entire order by the time our waitress arrived. Including the tough choice of beer or wine. Their wine selection was reasonable, but we opted for a couple imported beers, Italian Moretti for René and a Belgian Stella Artois for myself.

We figured it would go well with the gourmet pizza and beer theme we had chosen for our meal. The Santa Barbara pizza with shrimp and brie caught our eye. We ignored the absence of the word fresh, and pushed aside any negative energy pertaining to shrimp in the middle of desert country.

After ordering we asked our server to break a $10 bill down for us so we could tip Brian, who had been playing his cello since we walked in. After all, the hostess refused to make us change because she didn’t have any cash. Now in my mind, that hostess should have obliged and found us change. But never mind that.

We asked our server, as the bewildered hostess suggested. 🙄 She explained it was ” kinda crazy” but looking around at the half empty restaurant, we wondered why. I guess she felt it was half full.

When our server plopped down our two beer bottles and explained the bread was in the oven, we didn’t have time to point out her negligence before she ran off. Eventually she returned to tell us she was still trying to find change for the tenspot we had given her. I suggested she try to find us some glasses for our beers. This is when she noticed we might be a bit irritated.

Anywhere else, any other day, I might have let this get to me. But I had bad energy to blame it on, and after all this was T or C. I wasn’t expecting anything close to Moose’s. But I had put a clean shirt on, and it did have a collar, and there was a classical cellist playing. 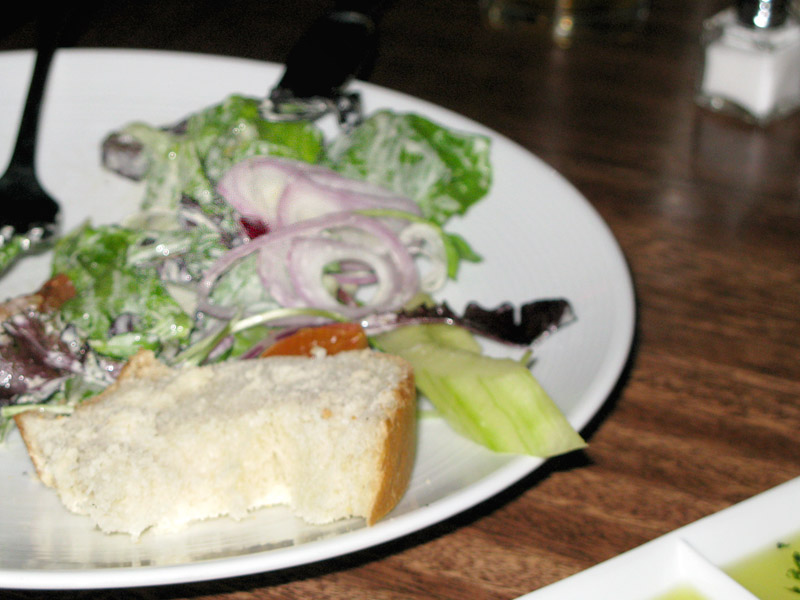 We let it slide and didn’t let the bad energy affect us. Then we waited, and waited for our Caeser salad. Which never came. Instead we eventually got a pretty vegetable salad.

This was not a Caesar, nor was it split as we had requested. I flagged down our server, and noticed a fresh pizza under the heating lamps at the beautiful open kitchen. I triedto explain that I didn’t want to wait as long for our caesar as we did for the first salad, especially if that was our shrimp and brie pizza sitting up there. She told us to keep the first salad and she wouldn’t charge us for it. She then returned right away with our pizza. And nearly fifteen minutes later with a Caesar salad and some fresh bread. Whatever.

The food was excellent. Ingredients like real balsamic and extra virgin olive oil for oven-fresh bread made it a saving grace. As was Brian’s cello performance, if only we could hear him over the din of diners. And we had a front row seat.

René took bad energy by the horns and turned it around for us all. She told our server about the “bad energy day” who replied only, “I believe it” and turned her frown upside down. But I still wondered about the service in a place like this in a town like T or C.

If your going to open a fine dining establishment – anywhere – and you have an impeccable attention to detail in flavor and presentation of your meals, you better train your staff to bring glasses for beer and serve food as ordered. Perhaps where your customers don’t expect good service, or really know what that means, it just doesn’t matter.

8 thoughts on “Good Cello Makes up for Bad Service”