Old Blue has always been my favorite ranch vehicle while workamping at Vickers Ranch. Or, I should say was. 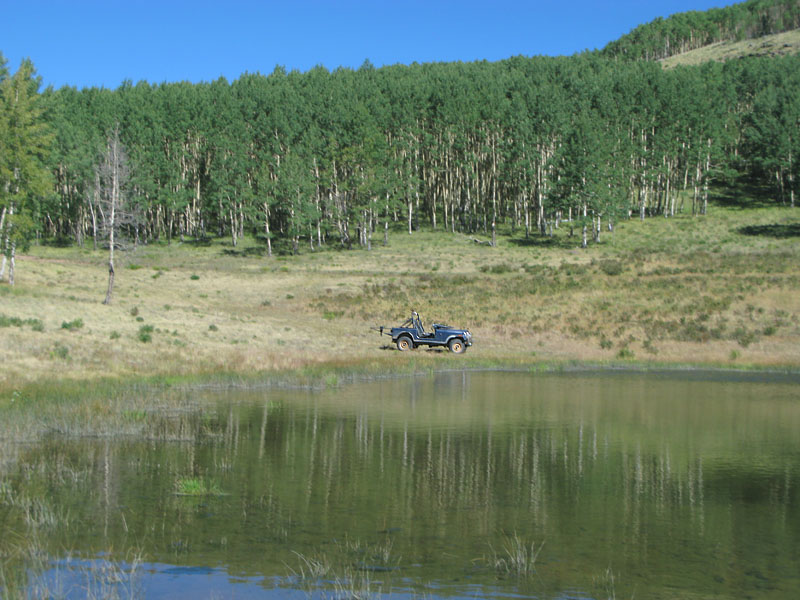 This is one of my favorite photos of the old blue Jeep I used for getting anywhere – and everywhere – every summer we’ve enjoyed workamping at the ranch. That’s from a scene I detail in our book, Be More Dog: Learning to Live in the Now. It describes a time I took Jerry fishing at Joe Bob, in our chapter titled Ranch Life. One of many good times in that Jeep – working and playing. But I digress…Let us have a moment of silence for Old Blue. 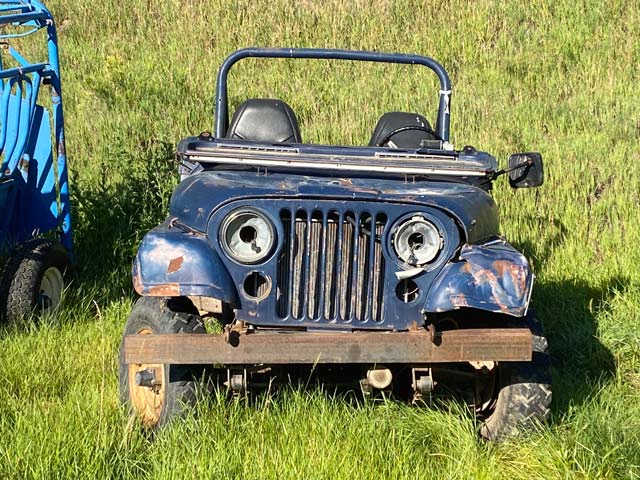 Sadly, his time has come to an end. Old Blue still runs, but barely. He has been put out to pasture, being saved for parts. A once brand new 1987 Jeep Wrangler, Old Blue put in many years of hard miles roaming the vast Vickers Ranch property. 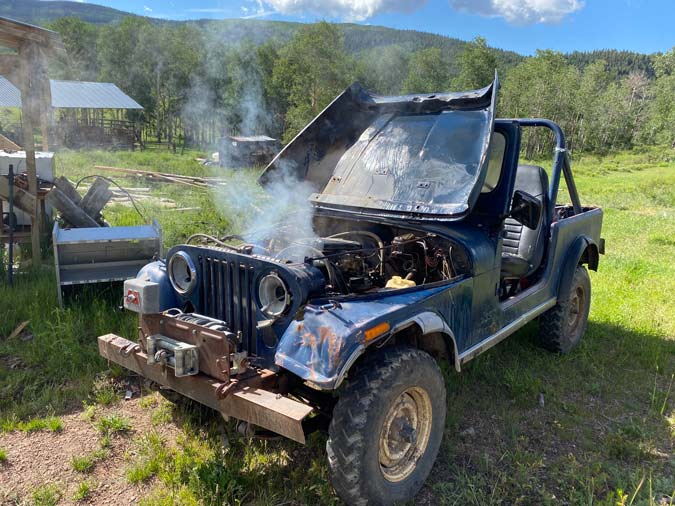 No, it wasn’t the radiator that did him in. That’s a simple enough fix. Heck, the old milk jug in back filled up with lake water once in a while kept him going for a few more weeks. That sound I heard when I first took old blue to the upper ranch when we arrived this year was rather foretelling. The rattle was the U-joint going out, and it kept getting louder. It got worse when the motor mounts broke. Still, certainly fixable.

Then I gave Larry on the John Deere 50 a jump start one day, just as we always did. Another part fell off. “This come off me or you,” I asked as I showed him the beaten up old bracket. He simply laughed. It was clearly off Old Blue. Still, I followed Larry all the way up to our lake project. The last bit of “road” Paul had cleared at the job site was rough, to say the least.

“He’ll make it,” Larry hollered. Yes, Old Blue did make it, despite the shift lever flopping about. On the way down the mountain, it got stuck in Neutral for a while. No fun, when those gears are the only thing providing a safe and sane ride down. Back in the shop, looking at the new motor mounts still in their boxes, I discovered what the final broken part was. “Oh,” Dan said. “The transmission fell off.”

Just how much time, effort, and money do you keep putting into fixing an old ranch vehicle that just keeps falling apart? Even if it was the best ranch vehicle, ever. There comes a point, you’re doing it for sentimental reasons. And that just doesn’t make sense, when you have another perfectly good old red Jeep waiting her turn. 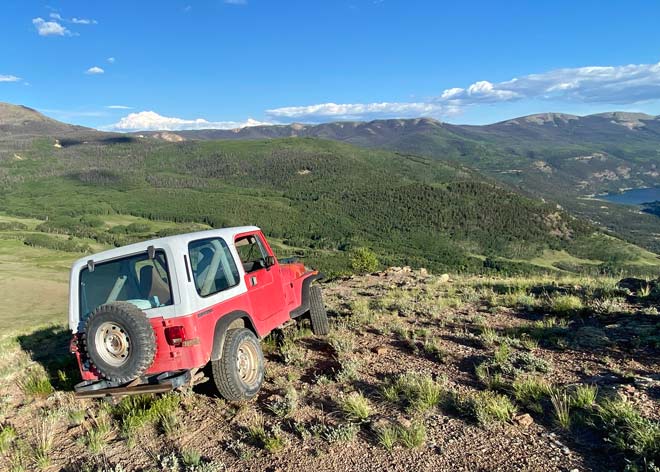 The old red 1989 Jeep Wrangler has put in some time at Vickers Ranch, but nothing like Old Blue. Her time to shine has come. But first, there were a few modifications to make. First that top had to go. And who needs doors? Customizing the roll-bars was no easy task. I needed to remove the top bars, in order to fold the windshield down. Of course, I couldn’t find the right size Torx socket. Big surprise. Once certain we were never going to try putting her back together, I drilled out the nuts and bent off the bars. Old Red is a much more comfortable ride now. 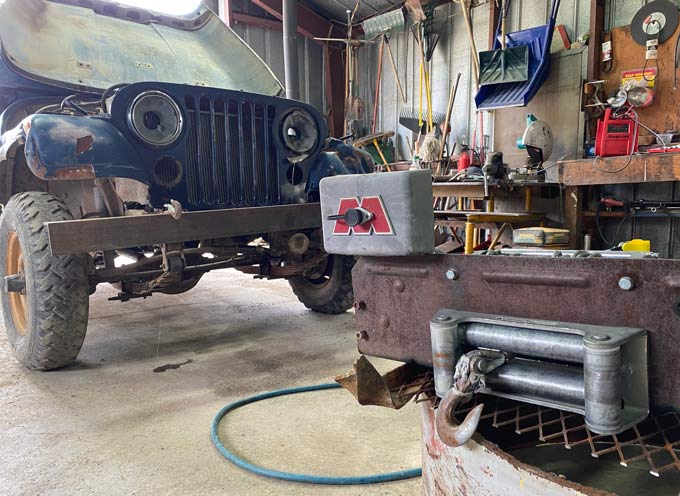 Then, there was the matter of that winch. Talk about sentimental. I felt like we were having a funeral service while dismantling Old Blue. Removal of the winch was the final straw. I cleaned out Old Blue for the last time. Then Larry had me pull one of the tail lights to put on Old Red. He actually got Colorado Collector Vehicle license plates, and we’ve made her street legal. We also made her look badass. 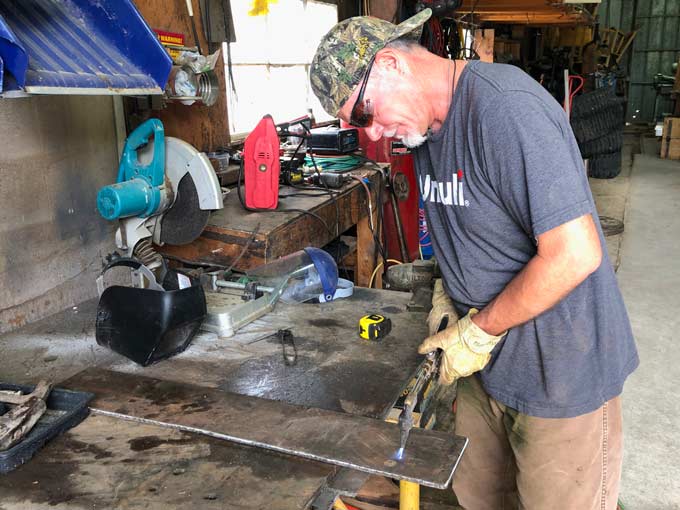 I torched some holes in a mounting bracket for the winch. Then Dan gave me a much needed lesson in stick welding. I may need a few more before I actually create anything constructive. 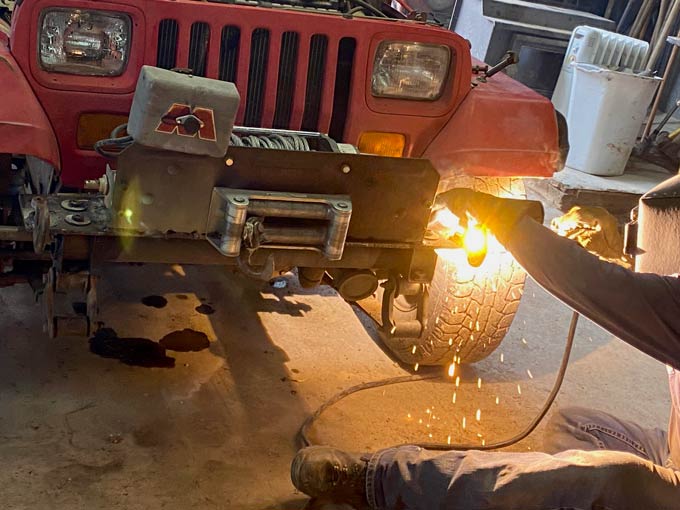 I did have some creative input though. Yeah, that’s an old mining drill bit we use to make the new front bumper. And we added a couple hooks. 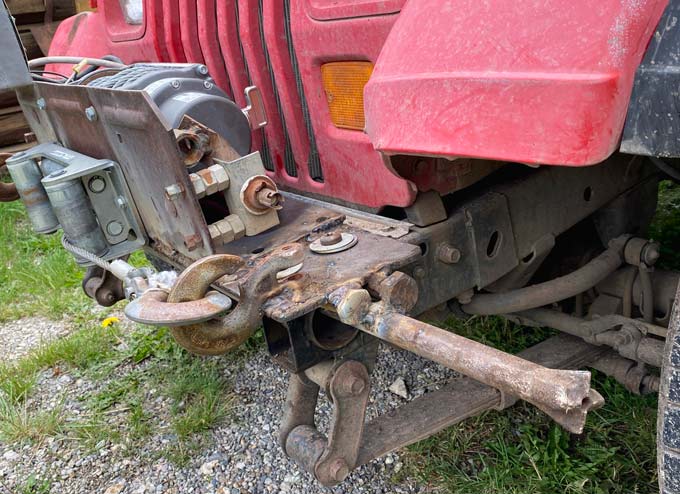 Larry has already put the winch to good use. Yeah, he got the tractor stuck mowing in a soft part of the third meadow. Luckily he was, “only stuck a little”. Old Red – with her new winch setup – has already proved her might. Oh, we did first use that winch to deal with Sandman. Just like Larry said that day, the same goes for Old Blue: Everything dies. 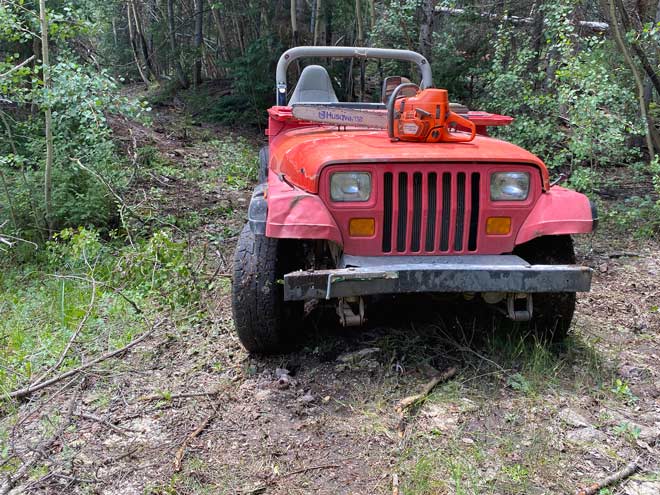 I’m looking forward to more years workamping at the ranch with Old Red as the new best ranch vehicle. For now, she’s got some big tire tracks to fill. RIP Old Blue.

3 thoughts on “Tribute to Old Blue – Best Ranch Vehicle Ever”