If you’ve been RVing full-time for much time at all, chances are you’ve heard it. That sporadic high-pitch buzzing noise can be heard in RVs of all makes and models. If you haven’t, just wait…

I spent months trying to figure out where the whine was coming from in our 2010 Arctic Fox fifth wheel. I first noticed it a couple years after we purchased the rig used. I wouldn’t hear it for weeks, then the faint buzzing would start up infrequently again. It still doesn’t even seem to bother Rene, but she spends many of her days pounding metal on the jewelry bench I built when converting our bunkhouse RV into her workshop.

I was certain the radio caused humming sound, and figured we had a grounding issue somewhere. I was way wrong. I soon discovered that turning lights on or off would cease the noise when it got too annoying. Determined to figure out the cause, a quick search for RV humming noise led me to the answer.

What is that humming noise in your RV?

Once I read a couple articles about RV converter humming noises, the next time I heard that hum I took the vent off a cabinet that contains ours and confirmed exactly that. Our Intelli-Power Converter Charger was buzzing. Upon closer inspection, I discovered it was not the cooling fan, but a distinct electronic buzz that ceased the second I turned on an overhead light. After troubleshooting the Intelli-Power PD9200, I determined it was functioning properly, just noisy. 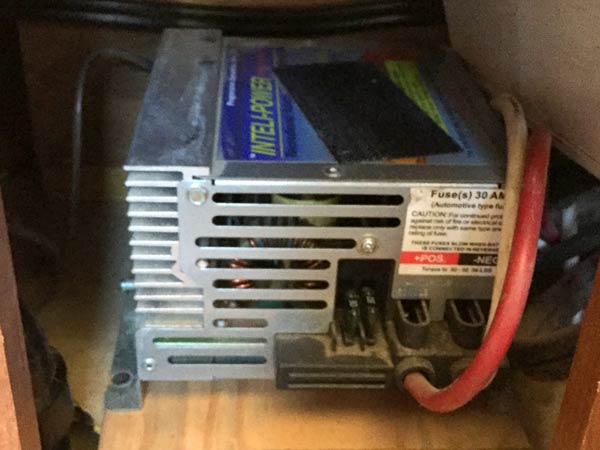 How to Fix RV Converter Noise

So, what is happening and what can I do about it? The noise is inherent to the design of these power converters. It’s apparently related to the operating frequency of the electronic components inside. When connected to shore power, the converter is powering your DC circuit, which powers the lighting. Loose connections and poor lamination in the transformer cores are common, and weak component mountings can also create vibration noises when there is no DC load. There are many reports from RVers who have gone through multiple converters, replacing them only to discover the next one also hummed, only at a slightly different pitch. We likely had the same issue in our previous Artic Fox, but the converter was mounted in a much less accessible location so I never noticed it.

1. The solution is simple. Live with it.

After reviewing various RVing forum discussions about converter noise, I realized this effect is quite common – with all converters, but especially aging ones – and that there is really nothing you can do about. The most simple solution is to apply load to the converter when the noise becomes bothersome. I have discovered that if the noise creeps back with lights on, turning one off will stop it again. The problem only occurs when connected to shore power, never when boondocking (since the converter is not engaged) so another option is to simply unplug.

2. Do not attempt to service your converter.

There are no user-serviceable parts inside the power converter. Attempts to repair the unit by messing around with the components inside could result in a dangerous electronic situation. 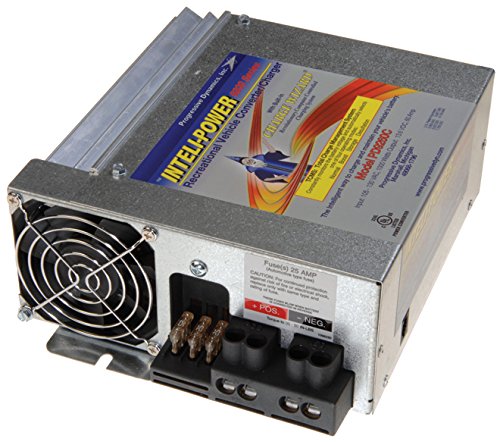 Typically, symptoms of a failing converter may be a loud popping noise or a puff of smoke, but they tend to go out suddenly. But if the buzzing gets too bad for you, the final option is to purchase a new power converter. Replacement seems rather simple, but we’re holding off on that – because of the evolving battery industry.

Why we’re waiting to replace our converter:

When we upgraded our RV solar power installation, lithium ion batteries were just catching on in the RV world. These would require a different type of charger/converter, so I’m not about to replace ours quite yet. But I’m gad we didn’t jump on that bandwagon too soon.

Lithium Iron Phosphate batteries will likely be the next big thing. This is the same type used in the new Dometic Power Pack and upcoming European all-electric motorhome. This new battery technology weighs less, are they are more efficient than lead acid, with a longer life expectancy, requiring less maintenance even than lithium ion batteries.

10 Responses to “How to Fix RV Electronic Buzzing Noise”