At the risk of sounding like that crotchety old RVer, what is with kids today?

In my day… (there I go again) If my parents took us anywhere, we were expected to pay close attention to whatever experience they had planned for us. Granted, we didn’t have the constant distraction of connected devices, but if we did there would have been a time and a place for gluing our face to the screen. And that would not be when standing yards away from one of the most popular natural wonder tourist attractions in the world. Like this kid…

What happens when parents ignore kids at Old Faithful?

I’m not exactly sure who is more ignorant here, the young kid with his face buried in his device while Old Faithful erupts behind him? Or are his parents ignorant for allowing him to do so? I can only imagine what they spent on their family vacation, to expose their child to the natural beauty Yellowstone National park has to offer–only to ignore him while he ignores main event. 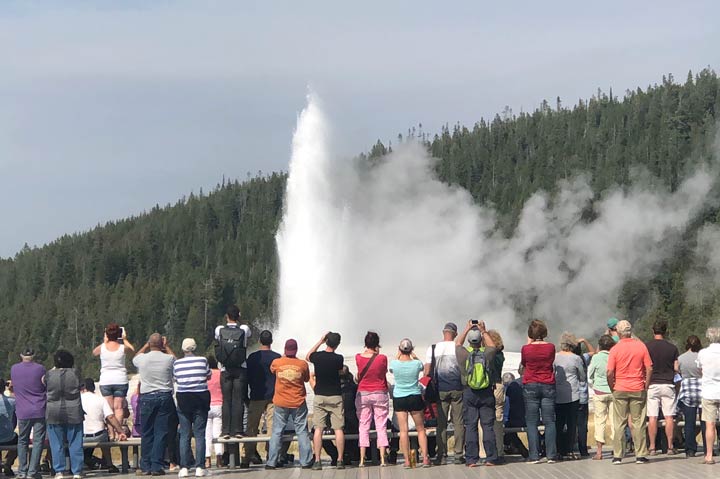 The first comment we received for this video on the LiveWorkDream Youtube Channel recommended I look in the mirror–suggesting I was no different than the kid–apparently because I was focusing on him, rather than the amazing geyser spouting primordial snot from hundreds of feet below. For the record: I had no idea the kid was even there, or what he was doing, until the eruption was almost over when I noticed him and his dad walking away from the geyser while it was still winding down. Only when producing the short video to share with our readers, did I notice him engrossed in the device rather than watching the awesome event before me.

Just a few days before publishing this, a video went viral on social media of some guy arrested for walking on the Old Faithful cone and–in case you haven’t heard–urinating into the cavern before lying down and peeing over the edge.

A total lack of engagement in these natural wonders? Or getting a little too close and personal?

2 Responses to “When Parents Ignore Kids at Old Faithful”

Leave a Reply to Patti Click here to cancel reply.