When we first hit the road, the very idea of staying overnight in a Walmart free camping spot made me cringe. Eleven years later, we found ourselves spending the night at the Whitehorse Walmart camping spot in the middle of town. With a lovely view of the wetlands outside our door, the scenery wasn’t nearly as horrendous as some Wallyworlds we have chosen.

The End of the Yukon’s Whitehorse Walmart Free Camping Spot

Every RVer who travels the Alaska Highway will go through Whitehorse at some point. As the capitol of the Yukon, it’s the last place to stock up for at least 500 miles in every direction. The store itself really stinks compared to most Walmarts, but up here you get what you get.

As a bonus, there is a free dump station, fuel and propane right next door. 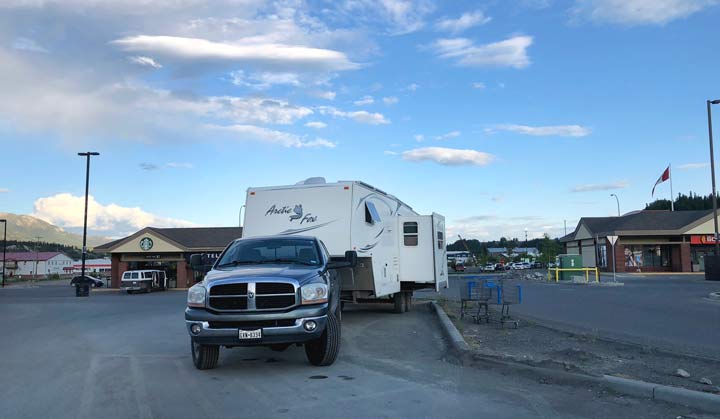 The Whitehorse Walmart had everything RVers need.

But now, Whitehorse Walmart free camping is coming to an end. Last week the Canadian Broadcasting Corp announced that Walmart is banning overnight RV parking in Whitehorse. The store has caved in to pressure from locals, who say that RVers are trashing the parking lot, creating parking mayhem and forcing campgrounds to close.

Our Fountain of Youth friends who happened to be there at the same time we were, Jim and Patti Ballou, are quoted in this Yukon News article about the Whitehorse Walmart free camping ban.

A Better Deal than Many RV Parks

Most of what the media reports is true: RVers pack into that Walmart. And I’ll admit, it was a bit of a shock to see RVers pulling out barbecues and lawn chairs in the parking lot. It often had the festive feel of a tailgate party. And some rigs looked like they had been there far too long. We spotted this notice on a few rigs. 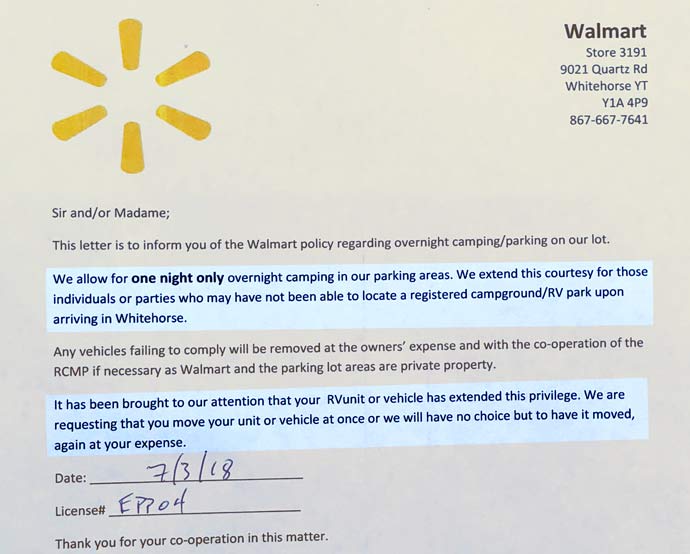 But overall we saw much less trash and sketchy characters there than any other Walmart that allows RV camping.

Walmart is blaming the camping ban on RVers. But the real truth is probably that local parks have put pressure on the store. Old news stories say park owners are pissed because travelers are passing up their establishments in favor of this place. 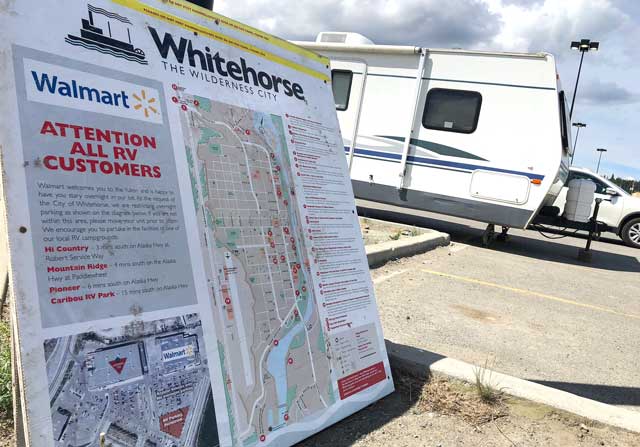 Honestly after seeing what’s available in Whitehorse, I can’t blame RVers for choosing an asphalt parking lot over the so-called “parks” in town. We paid for one night at a park and it was one of the most crowded places we’ve stayed outside of Las Vegas.

If local Whitehorse RV parks would do some upgrades so that guests weren’t crowded in like sardines, and have more full hookup campsites available, more of us would be willing to spend the $35 – $45 per night at their shoddy establishments. I know I would. 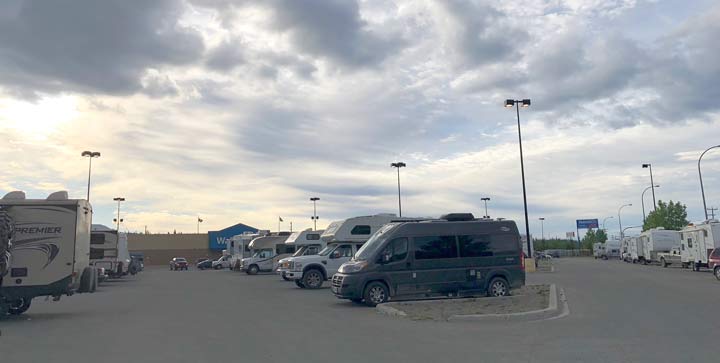 RVers shop at this Walmart, even though the selections stink.

In the Pioneer RV Park quoted in the article, the sites are so close together, that our stairs almost hit the neighbor’s slide out. Poor Wyatt bonked his head on their fender when he stepped outside. Our friends Jim and Patti tried to get into this particular park, and couldn’t get in. That’s the only reason they stayed at Wallyworld that night.

Where will all the RVers go?

We’re sad to hear that another Walmart RV camping spot has bitten the dust. We wonder how many more will follow?

11 Responses to “Another Walmart Free Camping Spot Bites the Dust”