We interrupt our usual RV product reviews and maintenance tips for a few photos and reflections from some favorite stops along the Alcan Highway on the first phase of our first trip to Alaska. 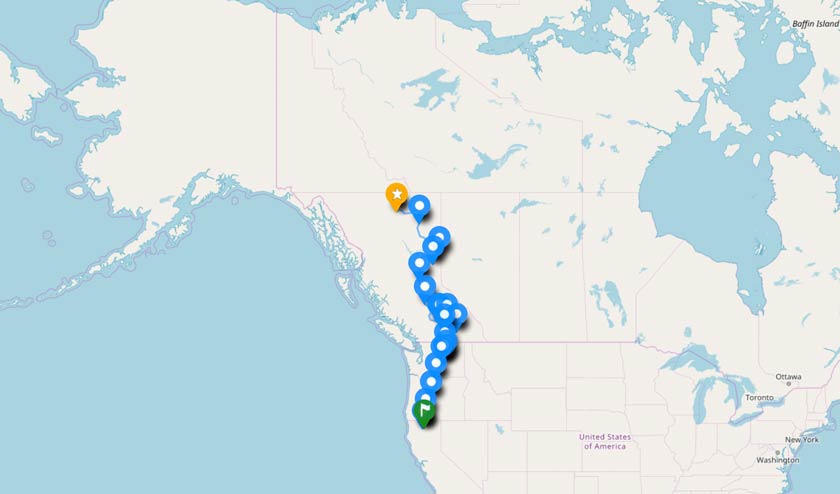 Officially on the Alcan Highway

We started heading North to Alaska more than a month ago at what I consider the beginning of the Alaska Highway, where US 97 starts in Weed, California. Just last week, we made it to the official Mile 0 marker in Dawson Creek—where construction first began on the Alaska Highway—after following Route 97 north from the border. It is therefore necessary to share the obligatory cairn photo, or two. 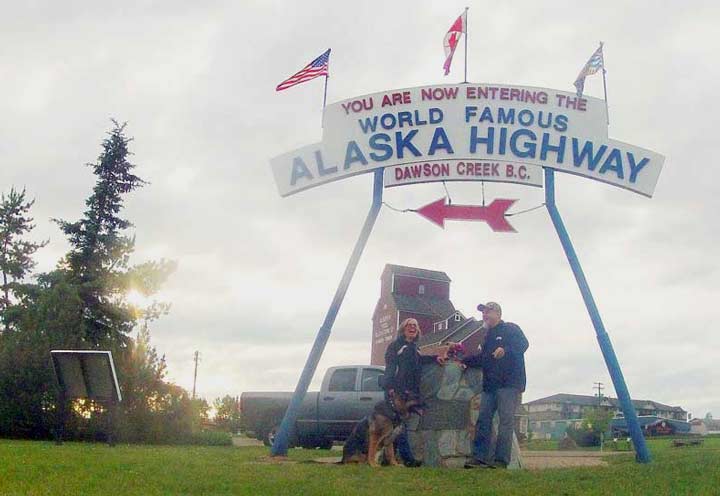 A funny thing happened on the way to Mile 0. After a long day of driving, RVDataSat repairs, and running errands, we arrived at dusk to take our photo next to the cairn marking where construction began on the Alcan. After setting up a small tripod and snapping a couple dark photos, a truck pulls up and I figure someone else wants their turn to snap a selfie. Before we could even ask, this nice Canadian offers to take our picture. Rene and I both silently wonder if he’s gonna ask for a couple bucks…after all, his photo is much better. 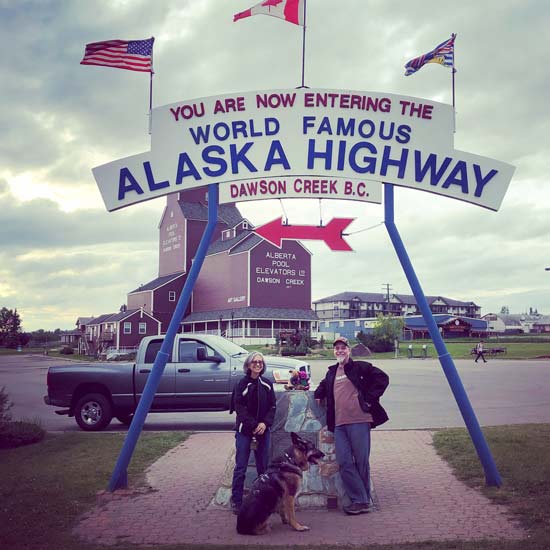 His response: “That’s just what we do here, eh.” And he runs off.

It’s true. Canadians are a nice bunch for sure. We’ve encountered nothing but kind people everywhere we have been so far. (UPDATE: Rene just had her first run in with a rude Canadian, working at a remote upscale lodge with RV sites. TIP: Most small campgrounds do not have dump stations, not even for a fee, and some apparently expect you to know that.)

Canada is big. We’ve come a long way since crossing the border, and we have a long way to go before reaching Alaska.

Canada is beautiful. Some of the best advice we found from folks who have made the RV trip to Alaska, was to spend more time in British Columbia. We’re glad we did, and are still doing just that. While we intended to travel every mile north on 97, we have taken a couple detours to discover hidden treasures most people miss while blazing a trail to Alaska. (We’ve met RVers already heading back south from Alaska. I just don’t understand their hurry!) 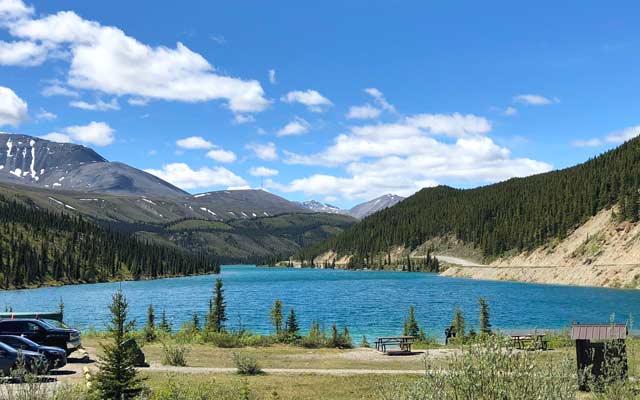 Canada is wet. We have crossed more rivers and driven along more lakes than anywhere we have traveled in the states. One of our most memorable experiences was enjoying a backcountry tour of the Kootenays, which we never would have discovered if it weren’t for our crazy Tripawds friends from Allensong Music. Another was taking our trailer onto the ferries required to get there. 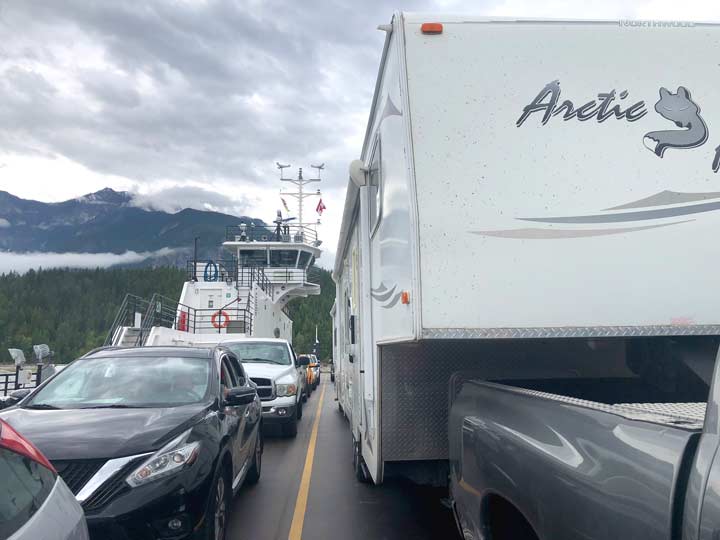 Canada is out there. Way out there. We’ve spent a lot of time in the Trinity mountains of Northern California, and the Rockies of Colorado. Nothing compares to the vast wilderness seen around every curve in the road along the Alcan Highway. Trees of all types are everywhere around you, and small towns pop up out of nowhere, with very little in between. 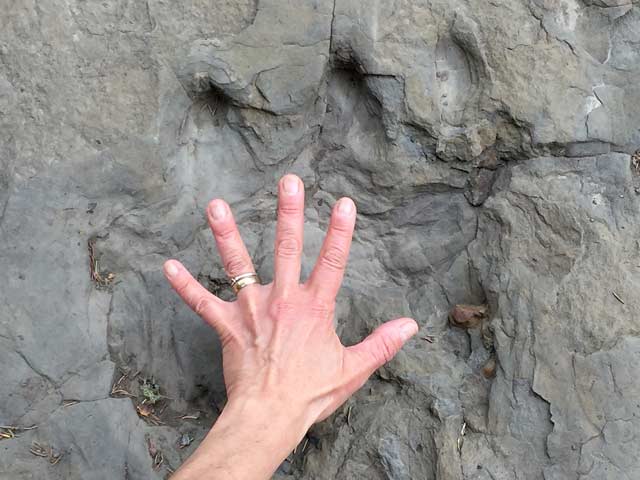 We decided to take another detour to one such town while waiting for a package (which is a whole other story), and are glad we discovered Tumbler Ridge, BC—where we walked in dinosaur tracks and ran with the bears, while trying not to fall off the cliff carved out by surrounding rivers. 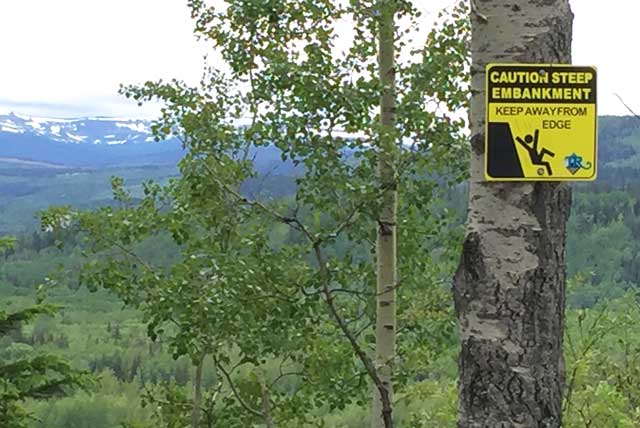 Canada gets steep. With years of experience hauling our home over the Rockies in Colorado, I felt totally prepared for the mountain passes of the Norther Rocky Mountains. What I was not prepared for, was the many much steeper grades that come up quickly on Highway 97 with little or no warning—12% has been the steepest so far. 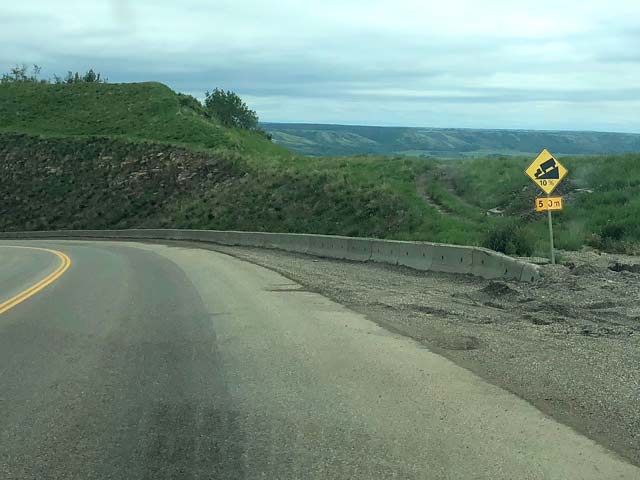 Highway 97, North of Fort Nelson BC

Canadian mountain passes are not nearly as tall as their fourteener counterparts to the south. But there seems to more of them—up and down, up and down. While traveling along an apparently level river road you may find yourself suddenly climbing or descending, again and again. 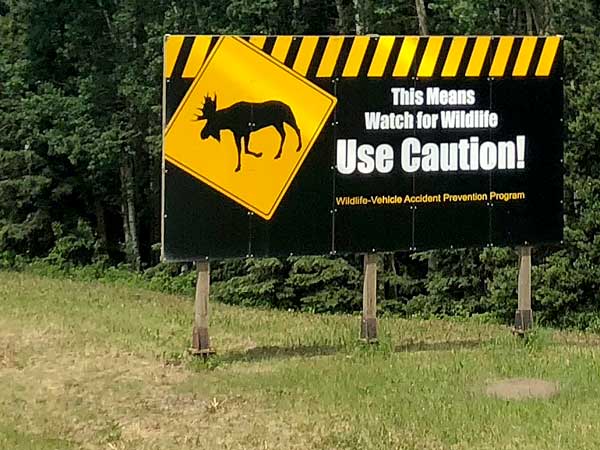 Frequent Wildlife Warnings in BC

Canada is wild. I was prepared to see plenty of wildlife on this trip. The sightings began once we reached central BC. Last week we spotted a moose, then a couple bears. As we approached Stone Mountain, the warning signs started getting bigger, and more frequent, with a greater variety of wildlife depicted. 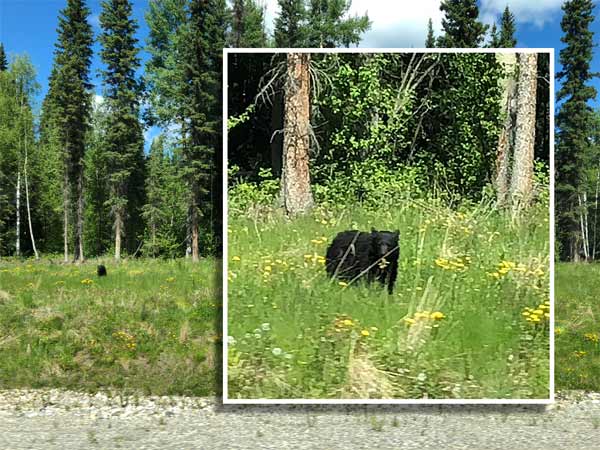 Then in one day, we spotted eleven bears. Black and brown, possibly one Grizzly. 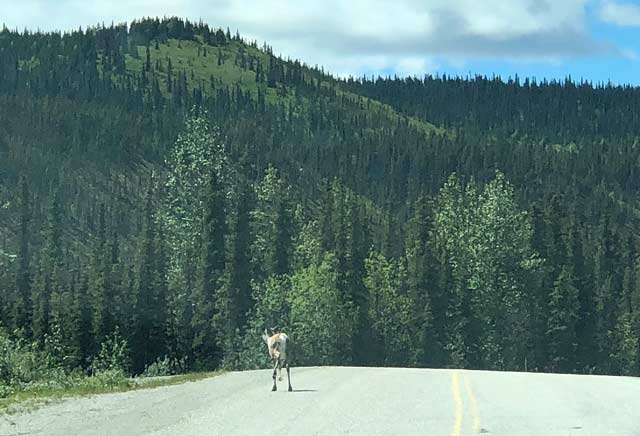 Watch for Caribou on Alcan Highway

Meanwhile, I saw the first Carribou I’ve ever seen in the wild, walking along in the road ahead of us. Indecisive about which way he wanted to go, I held back an put my hazards on, waiting for him to eventually walk off into the woods. 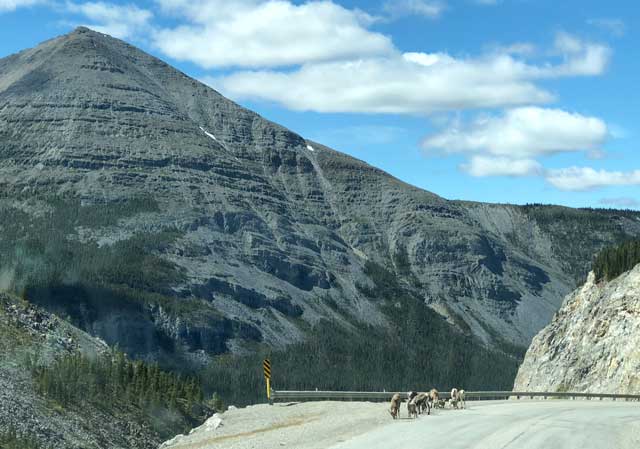 Shortly after the first sign warning of sheep on the road, we reach a curve on the summit to find a whole heard of Stone Sheep, with their lambs, hanging out on the highway. 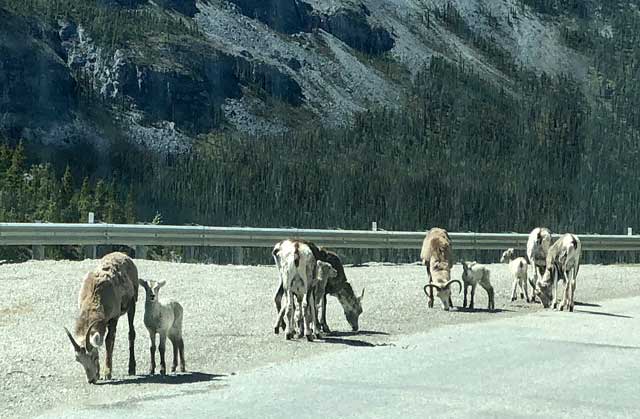 Oh how I could go on…perhaps we need to blog more often! 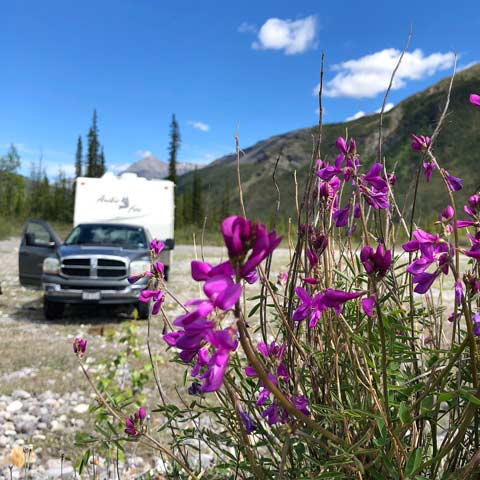 Free Boondocking at its Best!

No, we are not in Alaska yet. But our three-day stay at Petersen Creek was the first time we truly felt like we are getting there. This spot was just our type: a large open level area with easy access, next to a crystal clear stream, with breathtaking mountain views, and just enough horizon to get online via satellite internet in minutes.

Free Boondocking Along Peterson Creek, BC

This spot was a perfect place to catch up on some work after driving every day for so long. It was also the perfect place to put our RVDataSat 840 to the real test of enabling us to truly work from anywhere. 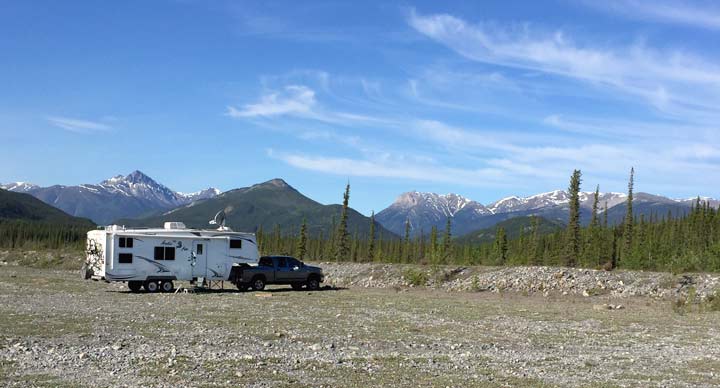 The farther north we travel, the closer to the horizon our designated geostationary satellite (Galaxy 3C / 95 West) appears in the sky, and the lower to the ground our dish points. It still amazes me sometimes how this system even works with the LNB pointed directly into a mountain. But I’ll save the discussion about satellite dish refractory angles for another time. 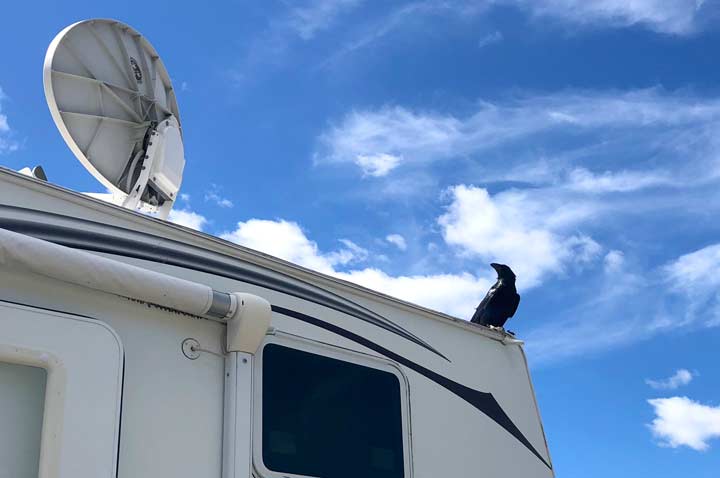 For now, if you want more photos don’t miss all our galleries! I have a feeling we’ll be updating them much more often…