When I posted on Facebook that we were going to Houston, my Texan friend Karen said “Be sure to stop at Buc-ees!” 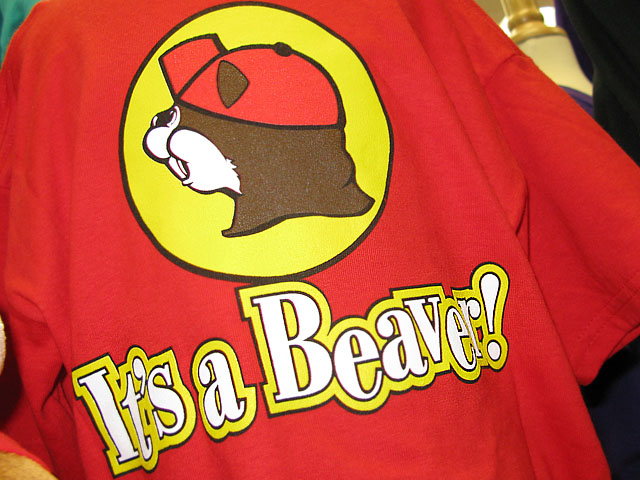 Thinking it was another great Texas BBQ joint, I said, “Sure! What is it?” Then she explained:

Buc-ees is a fast-growing chain of super clean, shiny gas stations in southeast Texas that people are fanatical about.

I gathered from the Buc-ee’s (pronounced “Bucky’s”) website that along with fuel, they sold touristy knick knacks and some Texas souvenirs. So I added this curiosity to our agenda. When we left the NuRVers Rally in Gonzales last week, we drove some 16 miles out of our way to see their flagship store in Luling.

“Bu-cees: Everything You Ever Needed, You Just Didn’t Know It” 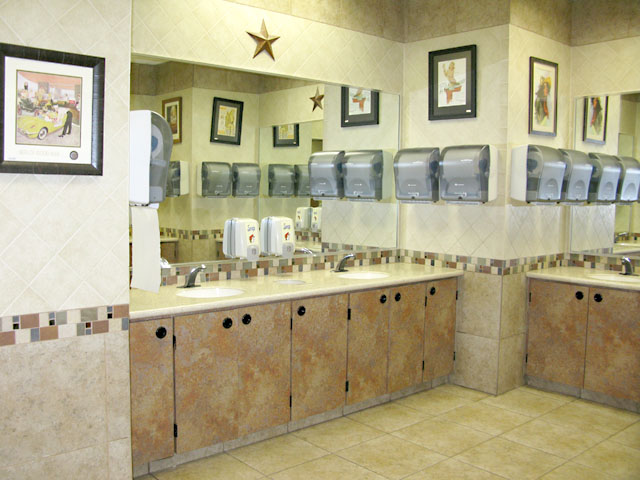 Buc-ees is a new phenomena that’s exploding because of their crazy Texas highway billboard campaign and sparkling restrooms that rival any in the finest casinos in Vegas (and even my own RV’s bathroom!).

As we walked through the shiny doors in Luling,  I swore I heard angels singing. One look inside, and it was obvious: Buc-ees is more than a gas station.

It’s the closest thing to a religious experience I’ve ever had!

Nothing is cheap looking or second-rate, it’s all first class and big, loud and proud, just like Texas!

And don’t think for a minute that the hook was in the gas prices, because they were cheaper than the competition.

After traveling over 35,000 in the last three years, I was practically on my knees, stricken with surprise and happiness at seeing a gas station that was so happy to see me!

My only gripe; they’re not big-rig friendly on purpose, so if you’ve got anything longer than a 40′ RV, you’ll need to park on the street. But trust me, it’s worth the effort.

Some people are afraid of Buc-ee’s cult-like following. And now that I think about it, they might be right. Maybe that sneaky little Beaver is dosing the fudge with something illicit. Because somehow before we walked out, I willingly surrendered nearly $40 on fudge, chow-chow, “Beaver Nuggets” (think: deep fried Corn Puffs) and a Beaver hat for Jim. Me, the biggest penny pincher there is, was happy to give it all up for Buc-ee’s.

5 Responses to “Holdin’ It for Buc-ee’s”