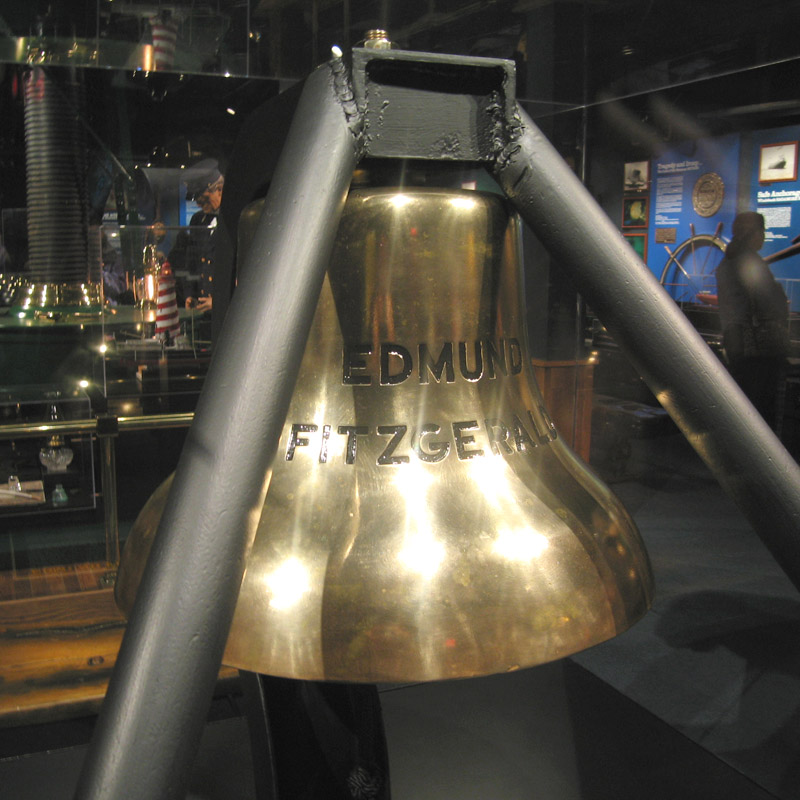 At about the age of eleven, I remember being touched deeply by Gordon Lightfoot’s ballad, The Wreck of the Edmund Fitzgerald. The story of the 29 men that perished on that stormy early November night in 1975 just always touched a nerve for some reason. It still does.

When we were in back in Duluth at the other side of Lake Superior, I started to tease René because she was not even aware of this tragic story and only barely recalled the song.

At that time, I noticed and ad for the Great Lakes Shipwreck Museum, but was disappointed to discover it was on Whitefish Point on Michigan’s Upper Peninsula which was not on our route at the time. After being persuaded by the Schwabenlanders to head North out of Wisconsin instead of South, however, the final resting place for the ship’s bell from the Edmund Fitzgerald became a must on our revised itinerary.

With no city parks or full-service campgrounds nearby, we were more than happy to boondock in the woods at Lake Andrus just North of Paradise, MI only a few miles south of Whitefish Point. A couple of fellow travelers we met on our way got a kick out of our answer to their question of where we were headed next … “We’re trying to get to Paradise,” René said.

After hand-pumping enough water to fill our rig’s tank, and giving up on trying to maneuver into a tight lake front spot; we set up in a big open space and removed our ladder-mounted bike rack to check for damage after snapping off a rather large branch. Luckily there was none. And since the bikes were down, we decided to go for a ride in the morning. We had an early dinner, got some work done and fell asleep in the pitch black silence awaiting the storm that appeared to be heading our way. It didn’t hit until morning.

We decided to fare the weather anyway and headed out on a trail that was far too sandy making it hard to have any fun. When we finally found the tar road – as they say in South Dakota – the hard rain was still just threatening to fall so we headed down the country road for a nice long ride. We got back to Jerry just in time for the rain to really start falling, knocking out our internet connections for a while. 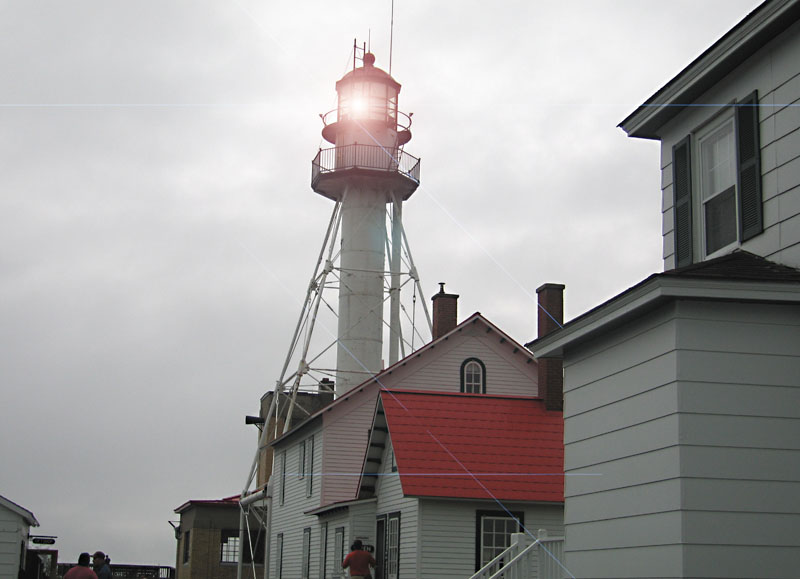 What better weather could there be for a visit to the shipwreck museum?

The Whitefish Point Lighthouse is located on a treacherous passage at the eastern end of Lake Superior – home to hundreds of shipwrecks and hundreds of lost souls over the years. The lightkeeper’s quarters are beautifully restored and staged with eerily lifelike mannequin’s depicting their lonely life of the early 1900’s.

The light itself is still operated by the U.S. Coast Guard, but its radio beacon and signal are now automated and controlled from elsewhere. They only come by periodically now for routine maintenance, or to service the bulb which has shone every night except during that heavy storm of November 10, 1975 when its failure helped seal the fate of the Big Fitz.

While the Whitefish Point Coast Guard Station is closed, all of the buildings are intact and the surf boat house includes a great display with a replica rescue boat and displays about the brave men who saved many others from their sinking ships. Other buildings house the museum itself, a small theatre, and a gift shop.

A $10 donation allows access to all the buildings, the museum, and a 15-minute movie about the raising of the bell from the Edmund Fitzgerald in 1995. This original bell is on display in the museum and was replaced at its watery grave with a new replica engraved with the names of the 29 crew members who were never found … because as the song says, “The lake, it is said, never gives up her dead.”

The Wreck Of the Edmund Fitzgerald

Of the big lake they called ‘Gitche Gumee’

The lake, it is said, never gives up her dead

When the skies of November turn gloomy

With a load of iron ore twenty-six thousand tons more

Than the Edmund Fitzgerald weighed empty.

That good ship and true was a bone to be chewed

When the gales of November came early.

The ship was the pride of the American side

Coming back from some mill in Wisconsin

As the big freighters go, it was bigger than most

With a crew and good captain well seasoned

Concluding some terms with a couple of steel firms

When they left fully loaded for Cleveland

And later that night when the ship’s bell rang

Could it be the north wind they’d been feelin’?

The wind in the wires made a tattle-tale sound

And a wave broke over the railing

And every man knew, as the captain did too,

The dawn came late and the breakfast had to wait

When the Gales of November came slashin’.

When afternoon came it was freezin’ rain

In the face of a hurricane west wind.

When suppertime came, the old cook came on deck sayin’.

Fellas, it’s too rough to feed ya.

At Seven P.M. a main hatchway caved in, he said

Fellas, it’s been good t’know ya

The captain wired in he had water comin’ in

And the good ship and crew was in peril.

And later that night when his lights went outta sight

Came the wreck of the Edmund Fitzgerald.

Does any one know where the love of God goes

When the waves turn the minutes to hours?

The searches all say they’d have made Whitefish Bay

If they’d put fifteen more miles behind her.

May have broke deep and took water.

And all that remains is the faces and the names

Of the wives and the sons and the daughters.

In the rooms of her ice-water mansion.

The islands and bays are for sportsmen.

And farther below Lake Ontario

Takes in what Lake Erie can send her,

And the iron boats go as the mariners all know

With the Gales of November remembered.

In a musty old hall in Detroit they prayed,

In the Maritime Sailors’ Cathedral.

The church bell chimed till it rang twenty-nine times

For each man on the Edmund Fitzgerald.

Of the big lake they call ‘Gitche Gumee’.

Superior, they said, never gives up her dead

When the gales of November come early!

6 thoughts on “Playing Tourist and Paying Respect at Whitefish Point”